Now, available on-line the recordings of Paolo Angeli's concert at the Palazzo delle Papesse Contemporary Art Centre, last September 5th 2007. You may listen to some excerpts of the night: the Sardinian serenate Canto in Re and three tracks out of his latest album Tessuti - Paolo Angeli plays Frith & Bjork: Tessuti, Anchor Song and The Hand that Bites. 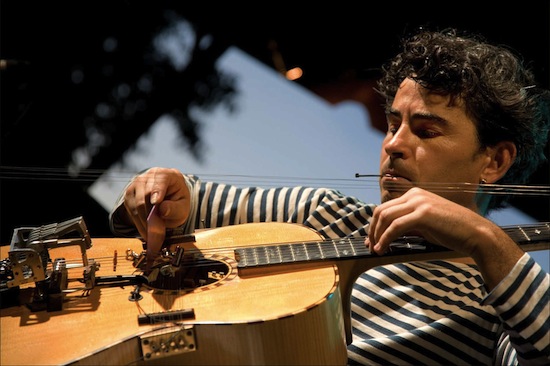 Sardinian composer Paolo Angeli has established itself in the United States, Russia, Brazil, Europe by collaborating with virtuoso musicians, like Pat Metheny, who adopted one of  his Sardinian prepared-guitar: an orchestra-instrument with 18 cords, an hybrid between guitar, baritone, violoncello and drums, gifted with hammers, pedals, some propellers at variable speed. He plays and records for Radio Rai Tre, Radio Rai due, BBC 3, NPR (Usa), Bayerisher Rundfunk, continuously performing in festival, galleries, theatres, and avant-jazz clubs. He just arrived in Siena after a major performance in New York at theVision Festival free jazz festival  in New York - is the first Italian to be invited in the most prestigious New York - and the trio recording with saxophonists Evan Parker.