A two minute intervention inside Cape Town’s disused Oriental Plaza, an Apartheid-era shopping mall designed to control Indian trade. On the 4th day of Ramadan, 2008, Sheikh Mogamat Moerat of District Six’s Zeenatul Islam Majid mosque was invited to sing the Adhan (call to prayer) inside the empty remains of the building a few weeks prior to its demolition to make way for luxury apartments. 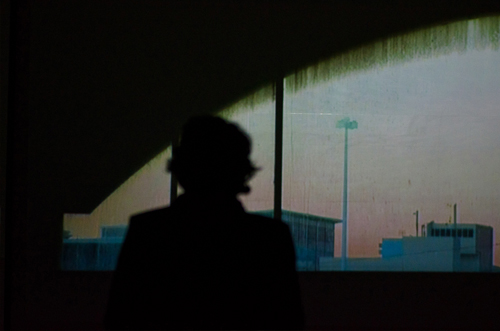 James Webb, 1975, South Africa, has been working on both large-scale installations in galleries and museums as well as unannounced interventions in public spaces since 2001. His work explores the nature of belief and dynamics of communication in our contemporary world, often using exoticism, displacement and humour to achieve these aims. Webb’s work has been presented around the world at institutions such as the Palais de Tokyo in Paris, CCA Kitakyushu in Japan and the Darat al Funun in Amman, Jordan, as well as on major international exhibitions such as the 2013 Biennale di Venezia, the 2010 Marrakech Biennale, the 2009 Melbourne International Arts Festival and the 2007 Biennale d’Art Contemporain de Lyon. His work is represented in the collections of the Iziko South African National Gallery, Johannesburg Art Gallery, Nelson Mandela Metropolitan Art Museum, the Darat al Funun, Amman, and Domaine Pommery, Reims.