Flame Test is an installation of thirty-six flags, waving in front of the Scandinavian Hotel, an abandoned building that was once one of the most prominent haunt in the city. At first sight they resemble the kind of conventional flags you may see in front of the United Nations; at a closer look, however, it comes out that they are images of burning flags, taken from the archives of a few press photo agencies. The photographs are cropped, the flags turns out to be flat, bidimensional, decontextualized but all of them, as icon of national power and autority, are defaced. 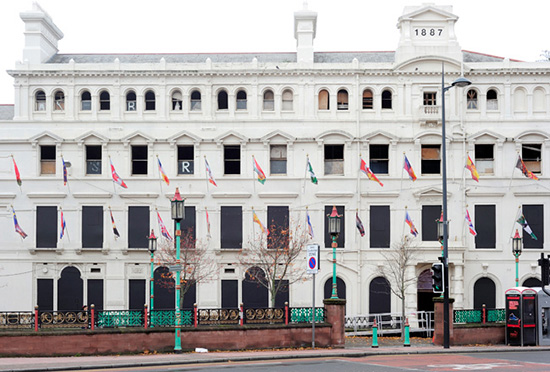 In this interview Will Kwan, an artist concerned with the political dimension of the diverse cultural practices in the frame of the economical cycle - talks about the installation he's presenting in Liverpool starting from Michael Taussing's theories on active defacement.

Flame Test - a work conceived during his residency at the Jan van Eyck Academie, in 2005, just after the controversies around the pubblication of a dozen of cartoons of Mohammed on the Danish newspaper Jyllands-Posten - is:

about the circulation of images in a global context through photo journalism and how images are cropped to create a kind of standing language for protests, politics and the kind of confrontation between nations. The installation is about our association with this kind of images, our political relationship to them, in the sense that their power as rapresentations depends on how we interact with them.
...it's not about bigger ideology but it's about a kind of instinctive reaction to symbols that carry power standing for some kind of autority
.

The autority is only enacted and embodied in an image or an icon with the understanding that in order for it to have power it needs to be defaced. I'm not interested in manipulating images or changing them but just in presenting their scope, reframing them in a way to create something where you can see a continuity and a dialogue between them...I'm interested in the images production, in the fact that these images exist and they are used as a language, so if it is about the media it is about that (the production of this kind of images) becoming part of the media landscape and syntacs and I think my engagement with images at this level. 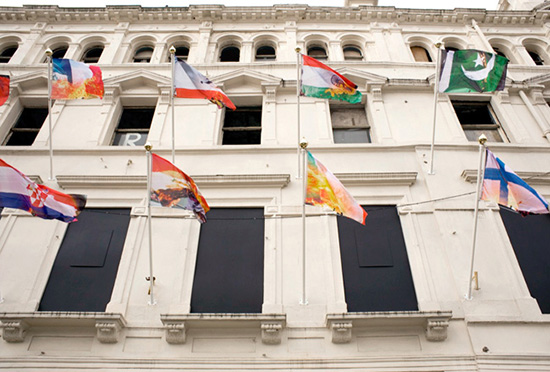 The music that goes with the interview is selected from the album A long travel for the space by Gouthy, available at acustronica.