Tania Bruguera is a Cuban performing artist who has decided not to use her body anylonger since 1999. Nonetheless she did actually perform at the 53rd Venice Biennial. Tania Bruguera is a political artist.
We had a conversation with her, right before her performance in Venice and we talked about art and politics, stereotypes and sabotage. Here you can listen to our conversation with her and below you can read the text she read during the performance.
[the *her* Bruguera is referring to, at the end of the interview, is cuban blogger Yoani Sanchez]. 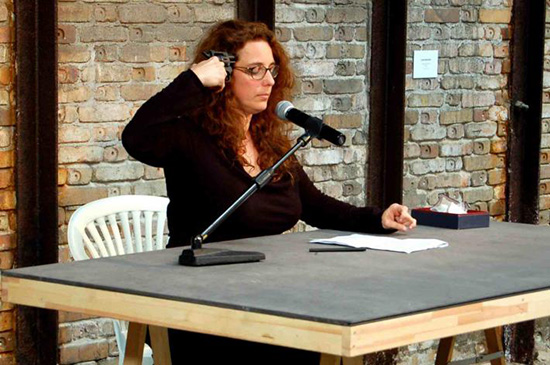 During the performance Bruguera simply sit at a table reading a speech, but from time to time, she stopped, held a gun and played the russian roulette on herself. The audience was shocked, unable to move and unable to understand whether she was faking it or not. She wasn't. Before anything could happen she was finally stopped by audience members and fellow artists. 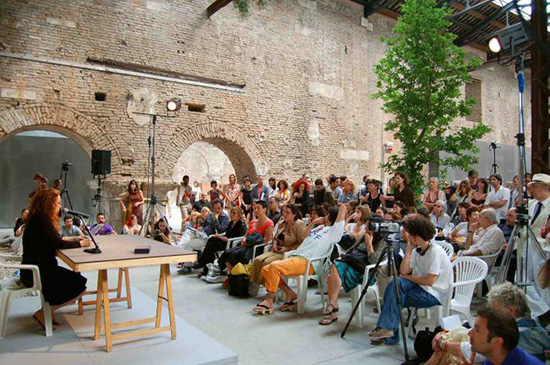 I
I would like to focus my presentation today in the words announcing this seminar: Culture as a Strategy to Survive. I would like to share some ideas and even questions on the idea of survival.

We speak of survival as an important element, even when its definition has more to do with a biological than with a social concept. At times, surviving is the wrong answer, the conservative answer, the answer sublimating permanence over and above the sense of living. At times surviving (or wanting to survive) is what makes us weaker, what makes us lose our intention to live, what makes us simply animals. To understand the social being, at times we should not survive.

Looking at the idea of survival from a social point of view, we could arrive at the conclusion that it is precisely the battle against this sense of stabilization what leads to our social advance. It is the reaction at the presence of death (or its equivalent: social inertia) what makes (what defines) the type of social subject we are.
Therefore, the question for me is rather: what do we do after having survived?
For how long should we survive? And the most important one for me: why survive?
All these questions have to do with responsibility.

The word strategy also implies a fragile situation, a short-term solution, a transitory state of affairs. We could say that since art has a socially limited function, a representation is not the presentation of solutions, but always a temporary diversion.

The responsibility of culture is not to be found in offering survival strategies, but in giving survival a sense. Culture as a social tool should make us do something on fear and the wish to begin anew. Because surviving is a process of erasure, a process of destabilization of values, a process where we define what social aspect is important for us and which are those we will give priority to. Survive is a process in which abstract thinking becomes corporeal.


II
(the politicization of survival)

I would like to quote some words from the presentation we just heard by Lisette Lagnado, when she asks: “May an exhibition today establish a place belonging to politics, as factories, streets or the University do?”
I believe that it is not only possible, but it is the challenge of art today. I believe there are structural elements belonging to this search:

1. the idea of a contextual art,
2. the idea of a useful art,
3. the need to change the times of art consumption,
4. the building of a new role for the spectator,
5. and forgetting the idea that art is eternal.

Artists frequently say they talk for others. The old idea of artists lending their voices to those who have no voice, but as we well know, this is problematic. We should give the privileged space of artists to the others, to those without a social space, because these are not times to talk, or to say. Art already finds much competition in the new media (Internet, SMS, and so on). These are times to do, to transform words into action, from a source of information and observation to a source where social tools are created. Artists must yield their space, a space of social privilege, because it is a space where you can re-imagine and then rebuild a power relationship: a space putting forward tools that may be transported to the real world.

Political art, the art that wants to be in a political place/site, must also think not in doing a work for others or because of others, but in making a work made by others. A work in which they are the material, the topic, the spectator and the documentation, where everything is one and the same thing, an activity where thinking and doing are a unity.

That is why artists should also redefine their role and their form of putting into practice their knowledge of the visualization of thinking.

What I find important is also the need of changing the consumption concepts linked to art (especially now we are living the collapse of the capitalist field) and I am referring to the aspects in its production, presentation and acquisition process. Political art has the chance not only of suggesting a different way of building relation models among objects (which is something rather falling in the sphere of action of capitalism) but also of suggesting relation models with ethics.

More than in an art made on politics, I am interested in a politically made art, suggesting new structures of power activation, where equality (equity) is a constant and continuous bargaining, an art establishing mobile structures of observation, because it is true that we make works of art that speak of the here and now, but they are made with observation structures mostly belonging to the 19th century with all the political and class implications stemming from this.

Artists should dilute in their roles, should establish the level and conditions of self-sabotage with which they will work.

The way in which artists should survive is by losing their memory, not considering the work they have done as accumulated capital and being ready to lose their individual history at any moment.

The audience should also stop being protected. The world of art, with all its institutions, has become a place concentrating in protecting the audience (because of an interest in educating it or the intention of entertaining it).

Artists should self-sabotage within the expectations they have created with their work. They should do likewise with the expectations of previously designed careers in which it seems that artists are rather small corporation managers showing the productive capacity (the productivity) of concepts linked with the conception of society as capitalist and not a new idea of society, a society that may not yet exist, a society you intend to debate.

Artists should self-sabotage in their relationship with others in the world of art by not pleasing them, and especially not pleasing institutions.

Artists should self-sabotage by quitting their work, by leaving their comfortable positions and looking for a difficult site, one that they do not understand, leaving doing design aside and do living. Artists should stop and start from scratch, from a place that is not self-nostalgic, a site where all our insecurities are present, an insecure place, a place that is not self-important, a place where art is not an important concept. Art should be a concept appearing later, after the fact, not an a priori decision.


IV
Ephemera as a way of surviving in others

Works of social art should use social time and spectators should leave aside being spectators and become social beings to “see” (it could also be said “to be in”) the work. Curators should also transform, because political art should deal with ethics and to value this discourse, we should leave the representational world and enter the world of power relationships. Then, aesthetics would rather be the effectiveness of these relationships and beauty would be seen as the moments in which these utopias materialize.

The idea, I might say the pressure, that as artists we have to do things that will make us survive is something we should reject, because it conditions the ideas of art as archive, as an index, and not art as a contextual answer, as an answer to the present moment.