Ragnar Kjartansson - Me and My Mother

In 2009 he represented Iceland at the Venice Biennial with a long lasting performance at the end of which the space he had acted in was messed up with the rests of six month of repetitive gestures, the room was melancholically littered with beer cans and cigarettes and more than 140 portraits on canvas of a bikini-clad young man, his good friend Páll Haukur Björnsson, were left around, abandoned, in the studio.

Early his year he filmed a new video - The man - outside Austin, Texan, that features the eldest living member of the Delta Blues musical movement, Pinetop Perkins.

He's now back to Italy, at the EX3 in Florence where beside Death and the children and Satan is real he's premiering the third and most recent act of Me and my mother, a ritual that falls every five years, a video performance begun in 2000 and with which he not only stresses his own physical and psychological resistance, he's not only examining the notion of loop, but also reflects upon the mother & son relationship.

Standing in front of a bookshelf, in a very domestic environment, Kjartansson and his mother are filmed while she repetitively spits on him. It's not by chance that - he says - he's presenting this work in Italy; he was aware of the close bond between italian men and their mothers and he was curious to see how italian men would react to his own ambivalent ritual.

We have talked about those performative and video practices he looks at in his research, from Gillian Wearing - whose video Sacha and Mum was inspirational to him - to Bruce Nauman and Vito Acconci; about collaborative works that seem to refer to the search of great moments of male friendship, about the unification of art and life eventually. 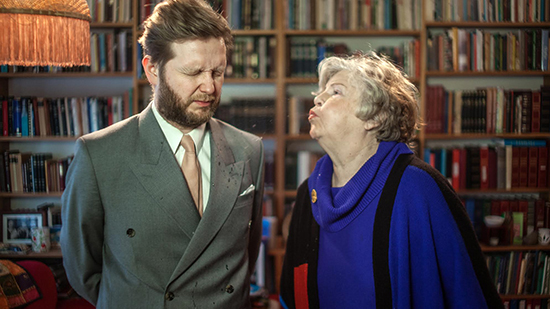 Ragnar Kjartansson, Me and my mother, video still, 2010.

Kjartansson has not only a rare crystalline attitude in examining and talking about emotional ties and affective bonds but is also great in narrating backstages and anecdotes - that is why it is worth listening to this interview.