My name is Patrick Joel Tatcheda Yonkeu, in art Omraam Tacheda. I was born in 1985 in Douala in Cameroon, and at school I studied science, at the St Jean Baptiste college de Bangangtè. After finishing school I went to university and won a scholarship to study fine arts in Italy. In 2016 I completed my studies at the Accademia di Belle Arti in Bologna with a research project on Zen in art. I live and work in Bologna, where I have my studio.

In my artistic research I often address topics linked to spirituality, constantly seeking the mechanisms that regulate contemporary society. I’m interested in finding a new form of spirituality better suited to our times, and through my work I attempt to convey the possibility that, somewhere in the world, there is a justice that can satisfy everyone in the best possible way. I address subjects concerned with the relations between human beings, and between man and the surrounding environment. I seek the place of man in the universe alongside the other creatures endowed with life . . . 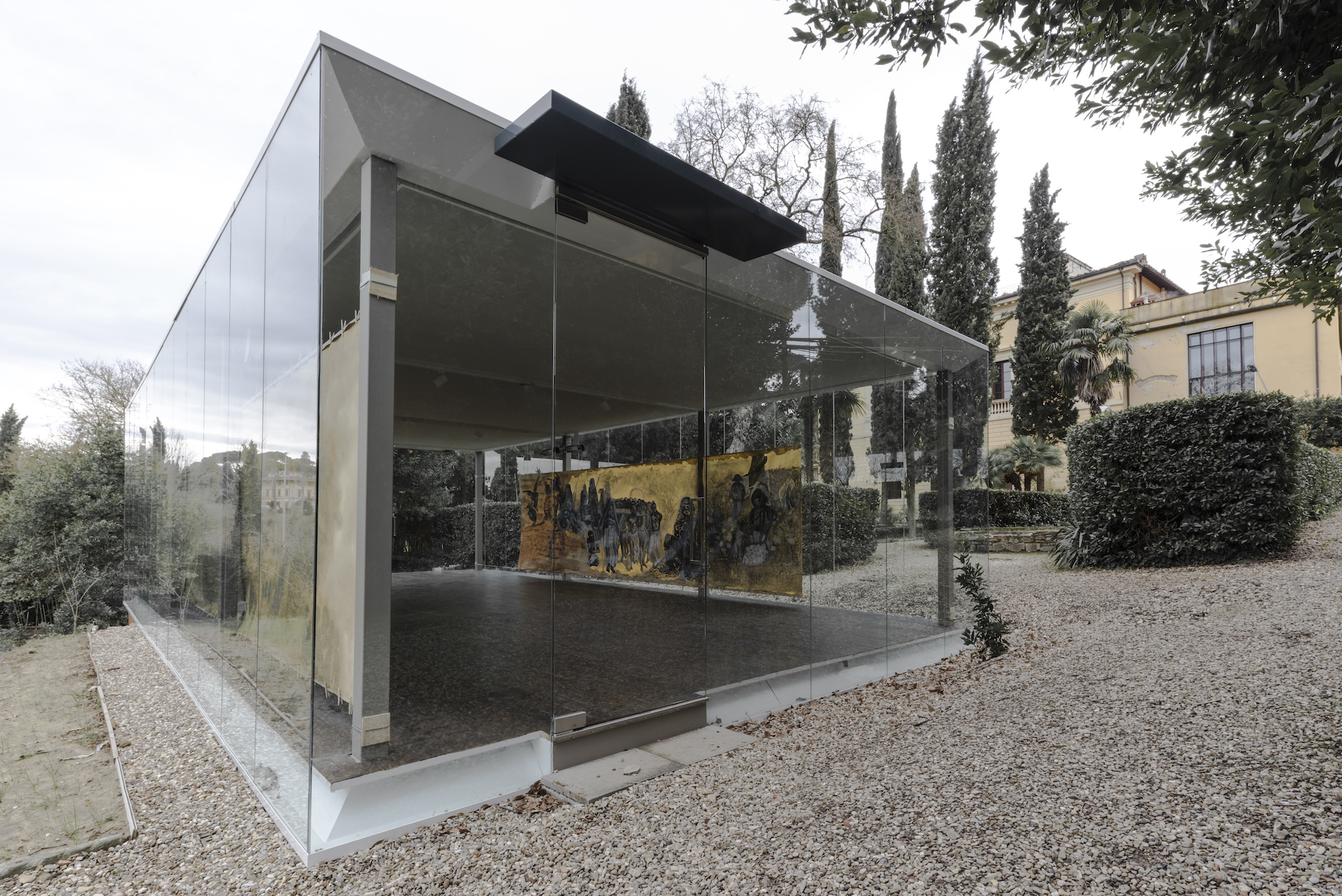 Can you describe Versi di Vetro (Verses in Glass), the work you are presenting at Villa Romana? How did you work, and what stories did you decide to tell in this pictorial cycle?

I work mostly on paper, because for me it symbolises the best means for sending messages, as in the past, for sharing news and preserving it over time, to make the future generations aware of their past. I feel at my ease with papyrus and I use natural pigments and oil in memory of African traditions, because I feel a strong bond with the traditions of my homeland and the cult of the ancestors. When I am executing my paintings I think more about the ritual I’m performing than about the work itself, because for me the result that you see at the end of the work is a spatial-temporal record of a ritual. It is the residue of a ritual that materialises through a material and physical support, namely paper.

This project, Versi di Vetro is organised around the history of the African continent, the African people, around the human tragedies in which we have been involved in the history of other peoples, descendants of the first populations that founded human civilisation coming from Sub-Saharan Africa, and I’m talking mainly about Egypt. The work is the result of research and of exchange with various researchers, historians, anthropologists and humanists. Years ago I discovered that the origins of scientific and literary knowledge can be traced back to ancient Egypt, and that there is a correlation between this people and the Greeks – and all western civilisations – through the cult of Isis and Osiris. Thales of Miletus, Pythagoras of Samos and many others carried out their studies in Thebes and Menfi and were disciples of Egyptian priests who passed on their knowledge. 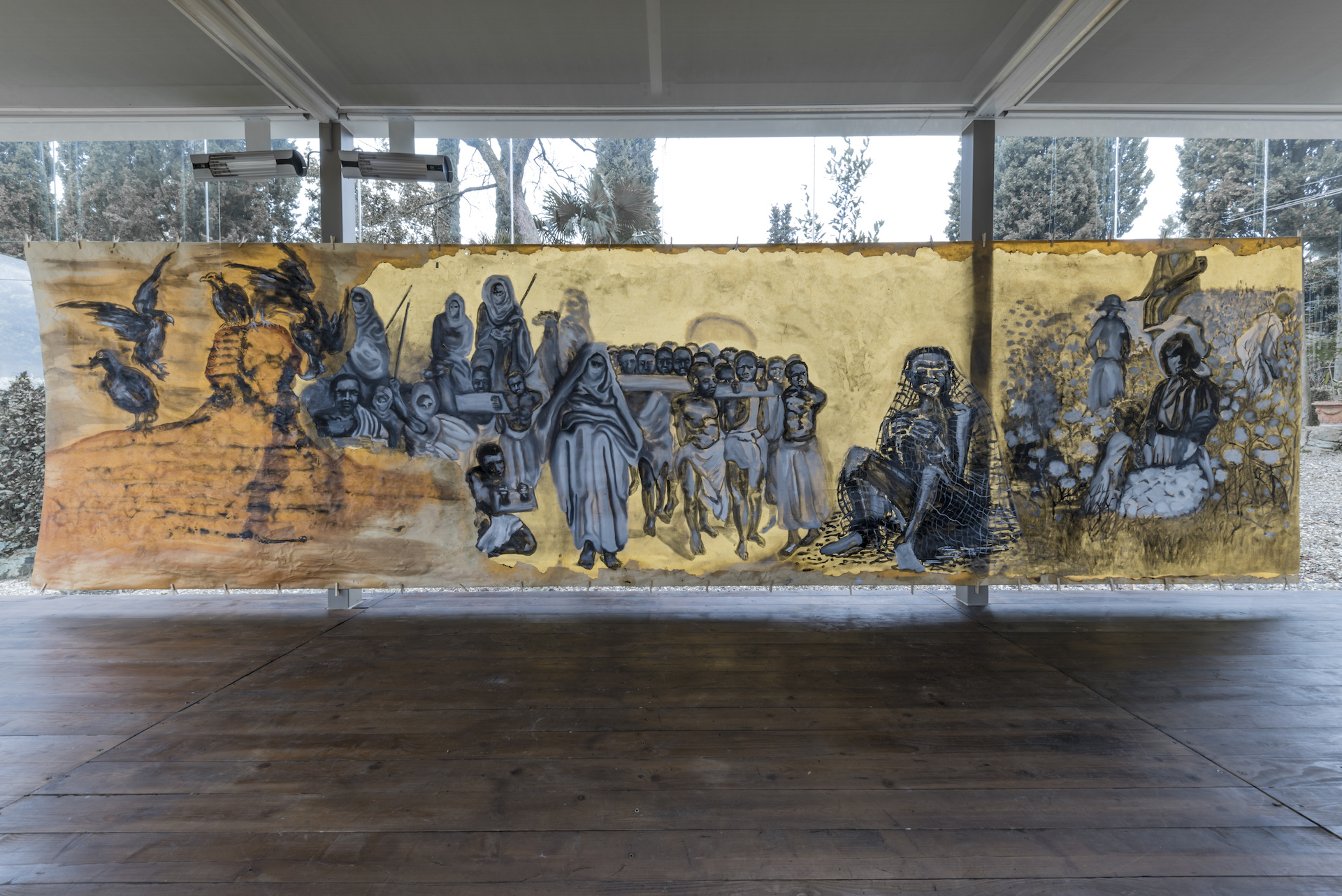 The initial story of the painting with the Sphinx and the Birds of Prey illustrates the recognition that the ancient Egyptians got for having initiated the other peoples into the mysteries and knowledge of the universe, hence what one might call a thankless return for all the work that had been done to permeate the existing world with knowledge. Starting from there, from the origin of human history, wars have never stopped, right up to the present. What allowed me to compose this work was the realisation that men are always talking about development, but that in human action there is a phenomenon that occurs cyclically: war, conflict of interests, and in this I can’t see any trace of development. In Africa we say that if you’re walking in the forest and you find yourself going round the same tree several times, then you know something’s gone wrong, you’re lost . . . Therefore, in this work I try to cast light on the bewilderment of the human being, I attempt to urge people to reconsider their points of view and to seek juxtaposition rather than debate. Because since the world began there have always been many points of view. We talk about a multilateral vision of the world, not a unipolar or monocentric vision. For many centuries now we have realised that it is impossible for the world to move forward with a single ideology – even though personally I am against ideologies, I am for the ideal, which is closer to the truth. And this ought to make us reflect on what went wrong during the evolution of human civilisation . . .

The scenes making up the Versi di Vetro cycle portray a downtrodden civilisation, an Africa overwhelmed by different catastrophes. Can you tell us more about the choices you made, what are the chapters in this tragedy?

I could talk about slavery, a phenomenon that I rediscovered recently through the case of the migrants that were tortured and sold for 200 or maybe 400 euro. During the visits that we made over these days with Villa Romana, I discovered in a tannery [in Santa Croce sull’Arno] that the skin of an alligator is worth more than that of an African. I want to understand. Is it’s me that’s crazy, or is there something that’s very wrong going on in the world?....

This conversation [only in Italian] was recorded in Florence, last February 2018.

It's produced in collaboration with Villa Romana, in the frame of SEEDS FOR FUTURE MEMORIES, a residency exchange project developed by Villa Romana and Thread to link the two ends of migration at the two reference locations: Sinthian / Tambacounda and Florence. Along 2018, 13 artists will be travel and work between Italy and Senegal: Patrick Tatcheda is one of them.

To read the full interview, visit the website www.seedsforfuturememories.com.

Here you can listen to Radio Papesse's radio edit.