It's something that you have to fight very hard to preserve a sense of spontaneity and the accident and the mistake, the good ones at least, when you are working in cinema because the pressure that come from outside can flatten the story in a way and they can also flatten out the kind of kinks that we bring into it when we work more spontaneously in a short term. As artists we are responsible for bringing some kinks into things, we are not responsible for executing something efficiently, necessarily.

We are talking about the underbelly [subtext] and for me the underbelly is always the sociopolitical, it always comes back. No matter how much we escape or we fantasize about something; it's exactly in that point - where we fetishize something, where we follow, where we enter the fantastic and symbolic realm - that the political comes and meets us, unexpectedly, inevitably,Imminently. [Omer Fast, November 2016] 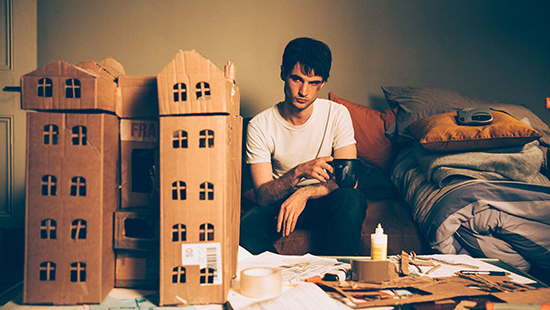 Remainder is Omer Fast’s first feature film. Based on the homonymous novel by Tom McCarthy, is a psycho-thriller that drives and then dumps us into the grotesque delirium of a nameless man.

After being hit by an unidentified object – was it a drone? – he awakens from a coma and he suffers total amnesia. While his body starts relearning how to move and to live through the pain, his mind gets stuck in a vicious and addictive loop of fierce reenactments of memory flashes. He is affectless and obsessive; without memory, with no identity, the protagonist is willing to sacrifice everything and everybody in pursuit of impeccable re-enactments of authentic existence.
Among the scapegoats on the altar of his bliss, there are the inhabitants of Madlyn Mansions in Brixton - a building the protagonist decides to buy with the help of the £8.5m insurance settlement – who must make room for his fantasy to become real. There are the performers – the puppets – of his exclusive show, there is Christopher, a neighborhood hoodie guy driving a BMX who gets mixed up with a big mess.

That’s it. If we tried to reduce Remainder to a more linear plot, it would be a failure. Omer Fast is not indulging his audience. To feel disoriented is part of the game, by being ourselves victims of his perfect narrative apparatus. He is not giving clues to better understand, that’s not even the point, or he might be giving even to much, at our risk of getting lost in gimcrack interpretations. Over-reading is the only possible way of reading Omer Fast’s work – Vincenzo Estremo* says – at the cost of getting lost into the labyrinthine narrative constructions, along the blurred and thin line between reality and non reality, consciousness and unconsciousness, past and present, at the cost of losing our mind by following repetitions, looping, and reenactments.

Art – as Umberco Eco writes in The Open Work – is based on a dialectics between closure and openness; it develops finite objects that are nonetheless used by differentet audiences with diverse cultural, social, psycological features and backgrounds.
The openness of a work of art becomes a field of possibilities if it is the author, the artist first-hand, to chose polyvalent and ambiguous messages. That is exactly how Omer Fast works with his stories, he gives room to re-readings, he embraces open stories, he’s willing to rework on them, he’s open to changes and by doing so he proves the long-lasting life of those narrative archetypes that have been accompanied the humankind from Omero to George Perec. 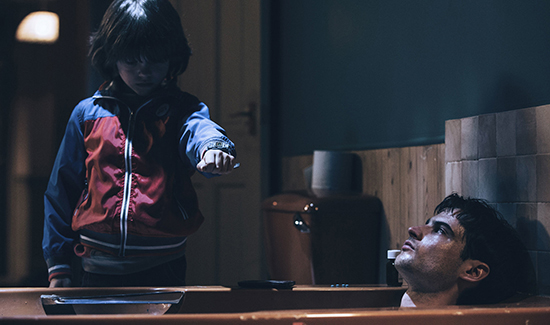 We met the artist in Florence, thanks to Lo Schermo dell’Arte Film Festival.
The interview is produced in collaboration with *Vincenzo Estremo.
The production of Omer Fast – Remainder is made possible thanks to our donors George Giurickovic. Lorenzo Giusti e Sebastiano Peluso.


Omer Fast was born in Jerusalem in 1972 and grew up between Israel and New York. He received a BFA from Tufts University and the Museum of Fine Arts, Boston in 1995, and an MFA from Hunter College in New York City in 2000. In October 2015, a monographic exhibition of Fast’s work opened at the Jeu de Paume Paris, and will travel to the Baltic Center of Contemporary Arts, Gateshead, and the KUNSTEN Museum of Modern Art Aalborg in 2016. His work has been featured in dOCUMENTA (13), the 54th Venice Biennale, and the 2002 and 2008 Whitney Biennials. In addition, he has been the subject of a solo exhibitions at the Stedelijk Museum in Amsterdam; Moderna Museet, Stockholm; Le Caixa, Barcelona; Musée d’Art Contemporain, Montréal; Museum of Contemporary Art, Krakow; Dallas Museum of Art, TX; Cleveland Museum of Art, OH; Museum of Contemporary Art Denver, CO; and at the Art Institute of Chicago, IL.
Fast Lives and works in Berlin, Germany.


Vincenzo Estremo has been awarded at the festival Iceberg 2009 as young writer where he has won with a collection of short stories: Omero e altri uomini illustri, published by Pendragon. He is at the moment Ph.D. candidate at Università di Udine and Kunstuniversität Linz in the Department of Time-based Media and guest lecturer at MA Visual Arts & Curatorial Studies, NABA, Milan where he is giving seminars about curatorship and moving images. Recently he has co-edited the book Extended Temporalities. Transient Visions in Museum and Art (Mimemis International, Milano). Estremo is co-editor of the book series Cinema and Contemporary Art (Mimesis International) and chief editor for Droste Effect Magazine. His article has appeared on Arte&Critica, Juliet, Camera Austria, Cinergie and many others academic Journals in Europe.