Devo Partire. Domani, the five channel video inspired by Pasolini's Teorema and produced thanks to the support of the Napoli Teatro Festival, is on display at Villa Romana beside a series of inedited very formal and bourgeois portraits painted in Da Fen, the so called 'oil painting village' in Southern China. 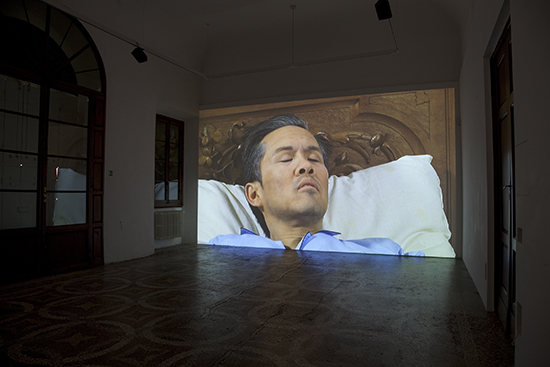 The projections are set up as if the five characters of the film Ming Wong has re-enacted - the father, mother, daughter, son and the maid, seduced by a mysterous stranger who will change their lives forever - inhabited different rooms in the Villa. The visit starts as one enters the gate: a map will help you finding them, without imposing precise narrative hierarchies, levelling off the five protagonists to a common solitude. They are all undergoing a massive identity crisis, each one is unhappy in his/her own way. 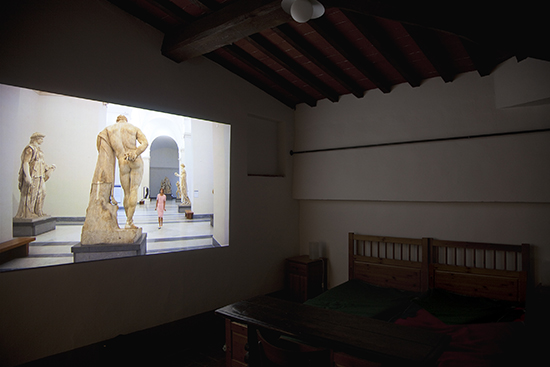 Five characters, just one actor, the Berlin-based Singaporean artist Ming Wong who balks a broken italian - as in many other re-enactments he parrots unfamiliar languages - putting his feet in their shoes as in many other projects he gets stuck to those roles who are facing personal maelstorms.

To name a few we can count Fassbinder, Luchino Visconti, Wong Kar-Wai, Douglas Sirk among the directors he admires and whose films have accompanied him in his own personal emotional and geographical transitions.

Life and death in Venice, inspired by Visconti's Death in Venice came out in 2010 as an antidote to the intense experience he had for the Venice Biennial where he had represented Singapore, Four Malay Stories is a reflection on the season spent in London, during which he much got interested into such issues as national and ethnical identities. Eat Fear and Learn German with Petra Von Kant marked his move to Germany and Kontakthope reflects on and questions his involvement into the art community in Berlin. His next project, based in Istanbul, takes the clue from his immersion in the turkish area of Kreuzberg, where he lives.

We met him in Villa Romana and going back till his project Homophonia for the British Library in 2005 we singled out a few recursive elements of his practice: among them, the importance of 'casting' and the language as a mean to deal with identity, appropriation and transmission, authenticity and representation.