Mario Pfeifer’s two channel video Again Noch Einmal is a closer look to pervasive racism in Germany. It stages the reenactment of a court case that arouse strong controversy in Germany.

Saxony, East Germany, July 2016. Four men drag Schabas Saleh Al-Aziz, an Iraqi refugee, out of a supermarket where, they say, he’s having a threatening behavior against the cashier. Once out, they use plastic ties to tie him to a tree. The entire scene is filmed by a witness and the video is published on Youtube, where it goes viral. These are the facts that Mario Pfeifer is reconstructing, by restating the supermarket scene, having actors playing back the entire incriminated facts in front of a jury of German citizens with migrant background.

To tell the story, Pfeifer uses two interlocutors as the narrative device, a man and a woman [actors Mark Waschke and Dennenesch Zoudé]. They are part of the scene, they are clients among the others in the supermarket but they soon act as TV hosts or prosecutors in a tribunal or even better in a crime TV series. Through their dialogue, as much as the jury that is listening to the facts, we get details and different perspectives on the crime. 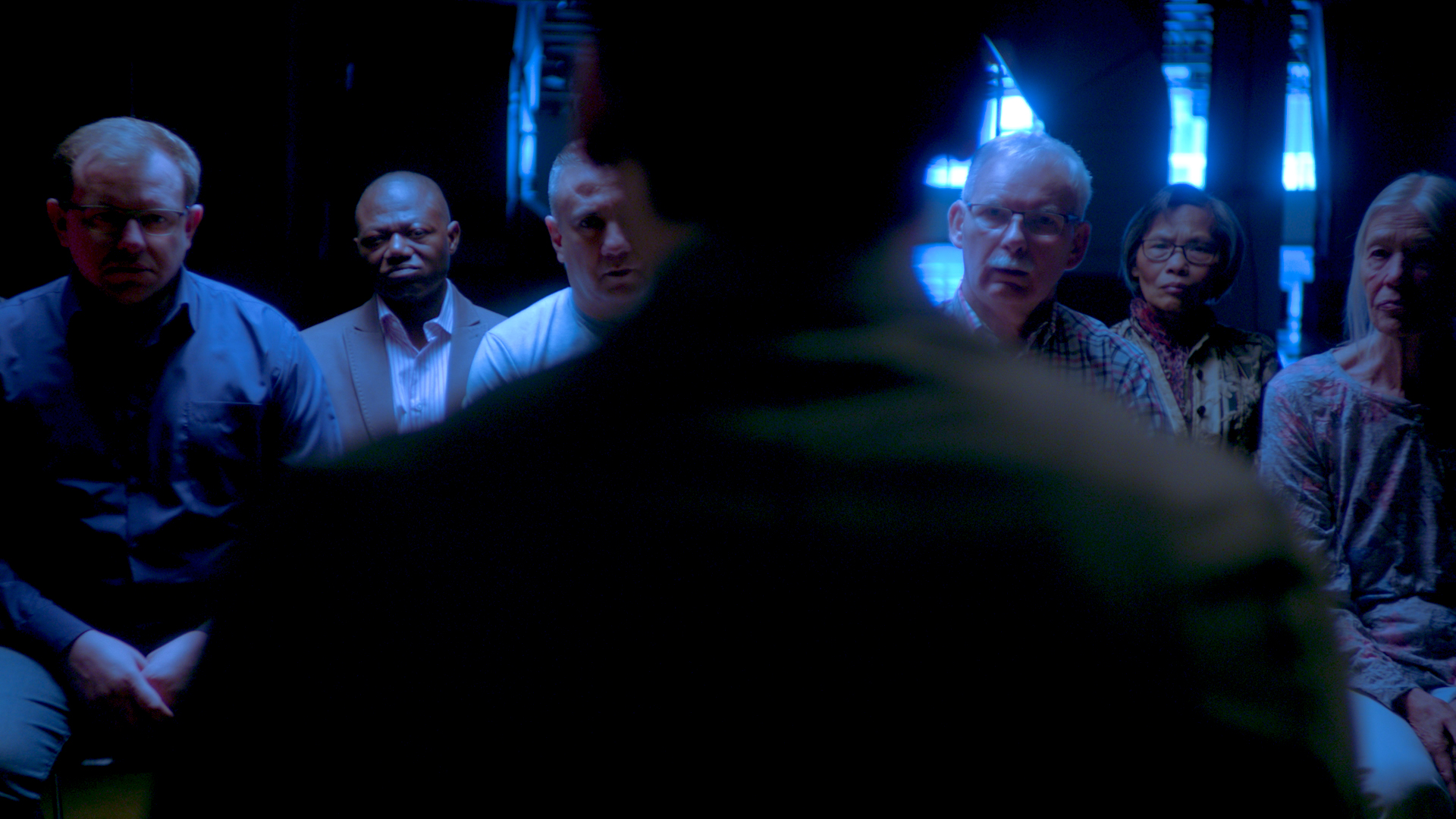 Starting from the event in Arnsdorf - the European and Germany's refugee crisis on the backdrop - we have talked about the perceived blurred distinction between civil courage and vigilante justice, about media representation, misperception and public interest. About his solo show at Kunstsammlungen in Chemnitz [last August a man was stabbed to death by two men from Syria and Iraq. The case was immediately instrumentalized and thing escalated so far that around 6000 people from the far right wing spectrum demonstrated in the streets of Chemnitz by shouting against the migrants and saluting Hitler] he talked about his trust in art and museums as a contemplative and inclusive place where to reflect beyond the more traditional political and social arenas.

The interview is accompanied by some audio clips from Again Noch Einmal and from its trailer. Some audio excerpts from the Youtube video and from some video records of extreme right-wing events in Germany have been used.

Mario Pfifer's interview was recorded in Florence, last October 2018. It is produced in collaboration with Villa Romana, in the frame of SEEDS FOR FUTURE MEMORIES, a residency exchange project developed by Villa Romana and Thread to link the two ends of migration at the two reference locations of Sinthian / Tambacounda, Senegal and Florence, Tuscany, Italy. Along 2018, 13 artists have traveled and worked between Italy and Senegal: Mario Pfifer is one of them.

Mario Pfeifer (1981 in Dresden) explores representational structures and conventions in the medium of film, at locations such as Mumbai, California and the Western Sahara. He combines cross-cultural art historical, filmic and political references in rich overlays. He has had many solo shows in institutions around the world, including Museo Nacional de Bellas Artes, Santiago de Chile (2014), Fotomuseum Winterthur (2015), Museum of Contemporary Art – GFZK Leipzig (2016) and Kunstsammlungen Chemnitz (2018). His films were screened at MoMA PS1 in New York (2013), Kunsthaus Bregenz (2013), Seoul New Media Festival (2015), Filmfestival Oberhausen (2016) and CAC Contemporary Art Center, Vilnius (2016). He participated in the Biennales of Montevideo (2016), Porte Alegre (2018), Berlin (2018), Pfeifer received the VideoArtAward Bremen (2010), the Salon Video Art Prize London (2011) and Celeste Video Art Prize (2012) in Rome.