Lynne Cooke is chief curator at the Museo Nacional Centro de Arte Reina Sofía in Madrid - where it is going soon to be opened Mixed Use, Manhattan: Photography and related practices, 1970s to the present - and curator at large at Dia Art Foundation, for which she is working right now on a retrospective devoted to Blinky Palermo. In 1991 she co-curated the Carnegie International and a few years later he was appointed as artistic director of the 10th Biennale of Sydney. In 2006 she was awarded the Award for Curatorial Excellence by the Center for Curatorial Studies at Bard College, where she also teaches. She has curated many impressive solo shows - among the artists she has worked with just to list a few, Francis Alÿs, Richard Serra, Thomas Schutte, Roni Horn, Louise Bourgeois.

We met her in Faenza where she was invited, with Miwon Kwon, to talk about exhibition-making and curating practices. In this interview, Lynne Cooke singles out the chronological borders of contemporary art, analyses the retrospective format, in terms both of curatorial and artistic practice, in the wider scenario of contemporary art where audience's expectations and artists' ambitions have changed and local issues together with globalizing forces are its distinctive threads.

At last we talked about Mixed Use, Manhattan: Photography and related practices, 1970s to the present, a show that having its starting point in the 70s, with the Deconstruction of Lower Manhattan, documents and illustrates projects and works of those artists who occupied deserted streets, abandoned piers and entire buildings, reoccupying that vacant public space, giving birth to one of the most productive and intense art scenes in the XX century.

This is Danny Lyon:

The passing of the buildings was for me a great event. It didn't matter so much whether they were of architectural importance. What mattered to me was that they were about to be destroyed. Whole blocks would disappear. An entire neighborhood. Its few last loft-occupying tenants were being evicted, and no place like it would ever be built again. The streets involved were among the oldest in New York and when sections of some were closed by the barriers of the demolition men, it meant they would never be opened again. 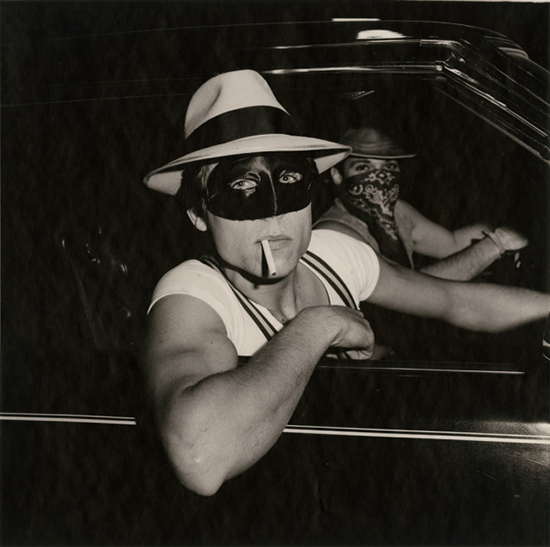 The show focuses on photographic series that witness the importance of walking as a strategy of reappropriation of the urban space, the gay scene - Alvin Baltrop and Peter Hujar are in this show - and that urban magical realism, as Richard Wentworth names it, that can be found in Gabriel Orozco's works as well.

Gabriel Orozco, Island within an Island, 1993.

Coming to the present the show explores the more recent work by artists who continue to engage with the city's public and improvised spaces. The exhibition will not travel to New York where MOMA PS1 is showcasing almost seventy artists and collectives living and working in the metropolitan New York area.

The jingle is composed and produced by Rosa Maria Sarri and Nicola Cavina.
The music that goes with the interview has been selected out of Harp Fragments, by Nic Bommarito, downloadable at www.12rec.net.