This interview was recorded in Marrakech, February 2014, on the occasion of the 10th version of the sound installation Freq_out, executed at the Theatre Royal in conjunction with the 5th Marrakech Biennale.

Jemaa El Fna, la piazza, the biggest pretech digital TV in the world, the biggest spectable ever. Overwhelming.
This is the noise I was expecting, the clichè I had in my mind and in my ears.

A clichè is something that has nothing new to tell, a clichè is what tells us what we already know and what we have been told hundreds of times and then it becomes a clichè because it's just telling what we want to hear. [Jacob Kirkegaard]

Jacob Kirkeegard is an artist focused on acoustic phenomena, that's what his biography says but from my point of view, he is the artist who tried to catch the inner otherworldly sound of the desert, to record the radioactive silence in Chernobyl, the one who tried to listen to Etiopia with the ears of its own people. He is in Marrakech with the nomadic and collaborative Freq-out sound installation at the unfinished Theatre Royal, an empty concret box that had failed to be an opera house. We meet at the Hotel Almas in the Nouvelle Ville, nearby the teathre where 24 speakers play at the same time the sounds of Marrakech as 12 artists decided to interpret them. 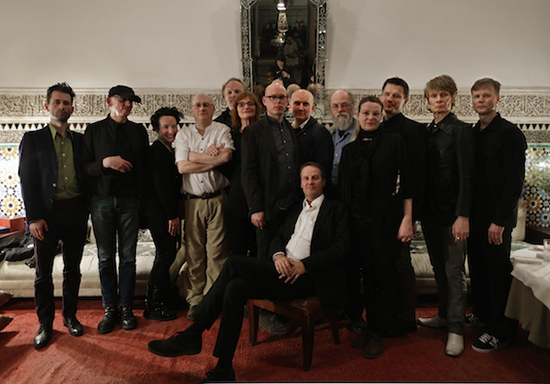 This interview was the chance to discuss diverse methods of searching for sounds and make them speak of a place, to talk of the unsolved ambiguity of every journey - being distant and at the same time trying to find authenticity - and of the uneasy quest of every sound adventure: wheter to understand sounds or not in order to record them. His approach, on one hand, seems to be close to what Franz Boas did in linguistic with his article On Alternating Sounds and in cultural anthropology establishing the cultural relativism and the participant-observation method of fieldwork:...We may hear things they don't even pay attention to anymore. Or they hear things we don't hear because they relate to these sounds from experiences they've had... So how would it be possible to hear what other people hear? [Ears of the other, Etiopia, 2010].

On the other his approach is not driven by the need of a thorough understanding, while he speaks more of a form of collaboration/conversation between him and the sounds:

By drawing back from all this intellectual European understanding of things we allow just to sense; if you know too much, you experience things from your knowledge, but if you try to draw back and just watch - no comment tv - you start to see and use your senses....and then you can know about it afterwards, when do you want to get the informations or when do you want to dive in and experience something without knowing? this question is very important.

We find the same questioning approach to pre-coded understandings or personal, emotional readings, in other two projects: Conversion, a vynil record for which he collaborated with a string quartet to have his two pieces Labyrinthitis and Church interpreted by classical instruments and his ongoing research on silent environments (read: Chernobyl and Fukushima) where silence becomes concrete and what we hear is just what we listen to in a certain way, within ourselves. How do we understand a sound coming from a certain place? How does it resound to us?

A sound is just a sound - he says - but the matter is never as simple as that.

This interview is in English.
It is accompanied by field recordings made in the Medina and at the Theatre Royal in Marrakech; by sound excrepts from Ears of the other and album Conversion by Jacob Kirkegaard.