Emily Jacir - Material for a film

An interview by Lorenzo Fusi

Emily Jacir was born in 1970 in Betlemme. She grew up in Saudi Arabia and she lives between Ramallah and New York. In 2007 she was awarded the Golden Lion for an artist under 40 at the 52nd Biennale di Venezia.

Last February she took part into System Error - war is a force that gives us a meaning – a group show curated by Naeem Mohaiemen and Lorenzo Fusi at the Palazzo delle Papesse in Siena – and she presented Material for a film, an installation comprised of a thousand blank books shot by the artist herself with a 22 caliber gun, mixed media and photographs.

In Venice, upon Robert Storr's invitation, she is re-arranging a new installation of the same cycle Material for a film, a research project dedicated to the memory of Palestinian intellectual and poet Wael Zuaiter, the first victim in 1972 Europe in a series of assassinations of Palestinian artists and diplomats perpetrated by Israeli agents. Zuaiter was gunned down by 12 bullets outside his apartment in Piazza Annibaliano, Rome on 16 October 1972. 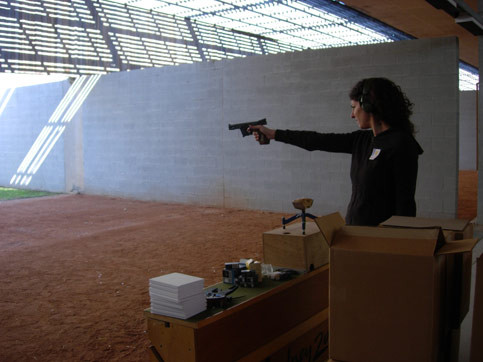 Emily Jacir in Sydney at a shooting range. She shot 1000 books with a .22 caliber pistol, the same gun used by the Israeli Mossad agents to kill Wael Zuaiter in Rome.

Lorenzo Fusi met Emily Jacir and they talk about this complex work and its origins. The conversation is in English.