Clara Meister - A dialogue on Singing Maps and Underlying melodies

This interview was recorded at the Palais Badii, on the occasion of the 5th Marrakech Biennale.

Clara Meister is a curator based in Berlin. She is co-founder and editor of ...ment journal and founding member of Soundfair, a collective exhibition whose purpose is to establish a context for composed sound to be understood and consumed as an artwork.

Her practice is concerned with the performative dimension of music:

...what interests me a lot in music is the relationship between the musician and the listener, I don't want to put music in the museum and let it die there, in an archive, I think it is so strong what happens when music is performed and when you are there when music is produced....I'm interested in the moment when music is irritating or opening up into situation, when it chages the situation you are in...

and with various forms of translation, having worked with artists as Saadane Afif and Natalie Czech, to list just a couple, whose works question the notion of autorship [through appropriative dynamics] and the act of translation [where to be tranlated is not simply a language into another but moreover our habits of perception and knowing into different and unexpected experiences].

She is the curator of the beautiful performative program Singing maps and underlying melodies commissioned by the Biennale of Marrakech and curated in collaboration with S.T.I.F.F Studio and Kamar Studio; a project that between February 25-28, suggested a new geography of the city, an alternative understanding of it through the means of music. 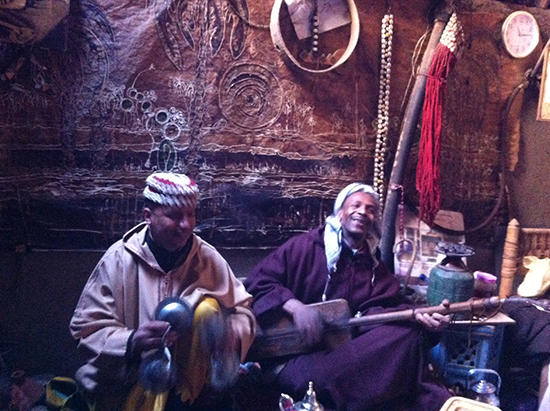 A project that played with diverse poetic forms of orientation and visual memory, inviting visitors and passers by to navigate the Medina, get lost, riconnect with different and off-the-track venues following a map where no exact coordinates were given.

Radio Papesse met Clara Meister at the Palais Badii and opened a dialogue on music as language and narration, as a medium of knowledge; on curating music as an artwork,on exhibiting music fostering its more performative dimension, inviting people to a proximate, irritating perhaps, intimate experience, in the streets, in the public space, away from the museum frame.

We think she managed to give voice to the Moroccan music tradition, presenting it for what it is: a form of art, more than a pure folklore phenomenon for turists and art travellers.

This interview is accompanied by field recordings made by Radio Papesse in Jemaa El Fna and in the Medina on the occasion of Si Mohamed Soudani's concert in the "Backroom of his hammam furnace guarded by a paper figurine" and at the Dar Bellarj Foundation during the concert of the Choeur des Mamans Douées de Dar Bellarj. It also goes with excrepts from poet Ahmed Chtara's walking performance and Anas Bouzergane's concert recorded and mixed by Charles Collin.