Going back to his most recent works, from One and Other - the public art project which allowed, over 100 days, 2400 people to occupy for one hour the Fourth Plinth in Trafalgar Square - to Another Singularity and coming to the brand new 2X2, we asked Gormley thoughts and comments about sculpture, its public dimension and contemporary non monumentality, about the relations with the space it occupies, in terms of reconfiguring the field itself within it works, and the different time that it deals with. 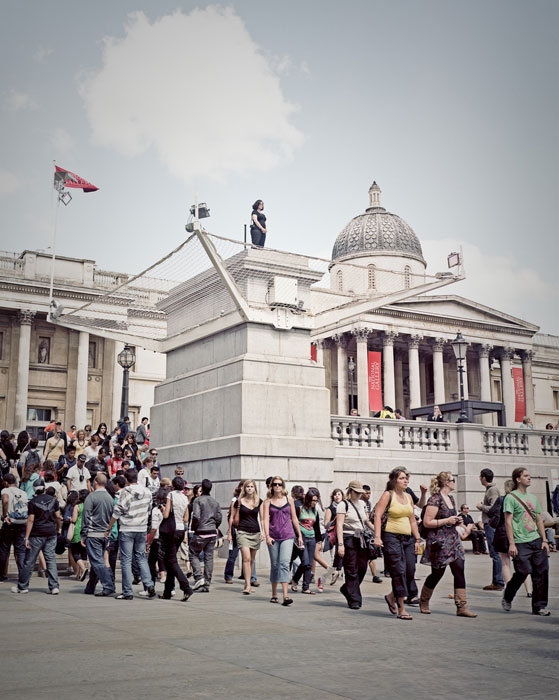 I've installed a work called 2X2, a newly made but not humanely touched carving...We have been using the most advanced technological means...they (2X2) derive from a digital mapping of my body, I was moulded, positive plasters were made and scanned and my body was turned in a topographical map of 30.000 coordinates. That wire was then used as an enclosing domain into which 80 nesting polyhedral forms were created to occupy the volume that my body displaced.
I suppose I'm trying to think again of how to make a marble carving without any of the illusion and representational effects of let's say Renaissance carving and at the same time dealing with the body
. 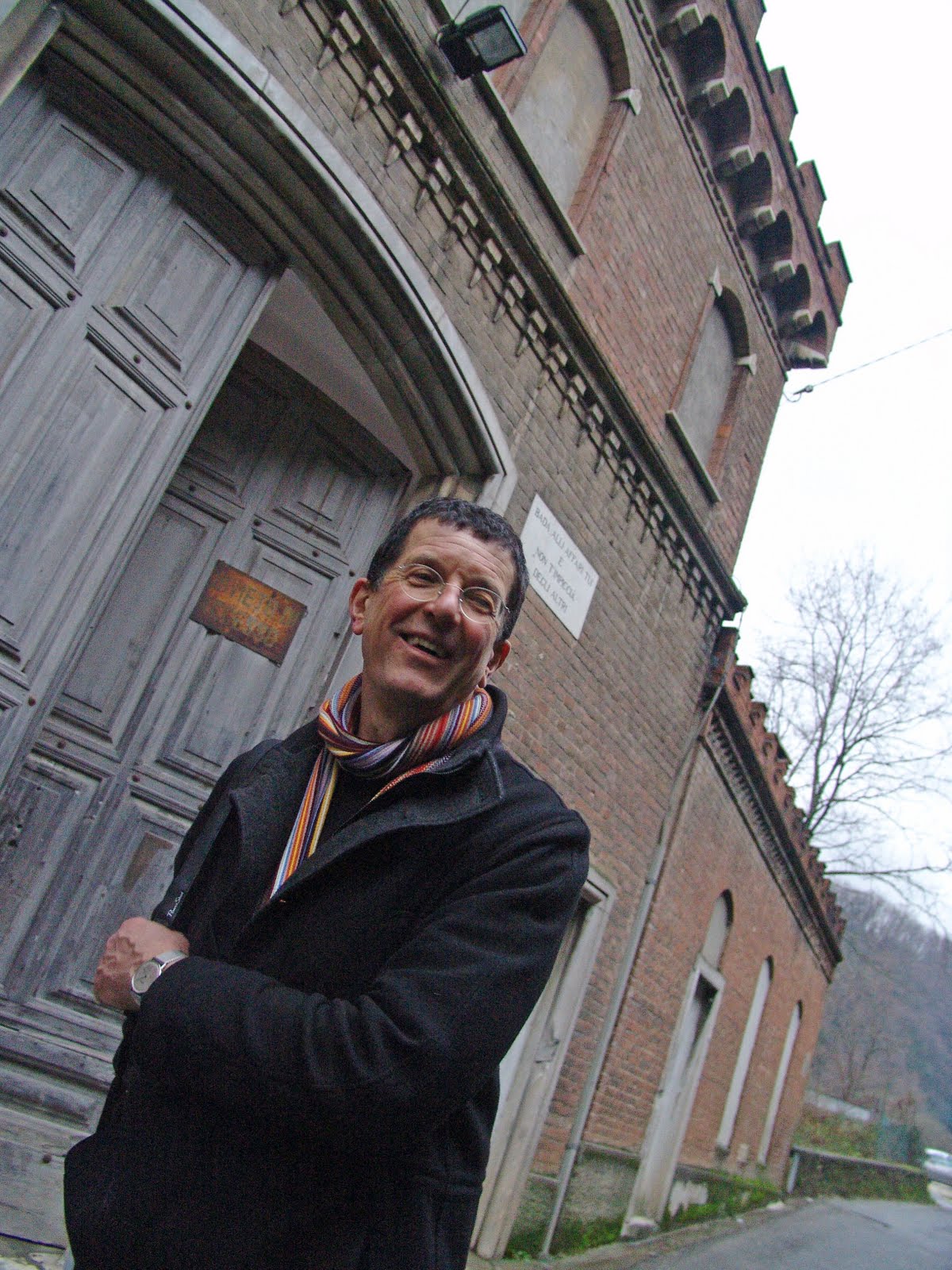 At the ex-Laboratorio Corsi Nicolai di Carrara - a now-closed workshop which formerly produced funerary monuments, and one of the most dramatically romantic and decadent of the post-archeo-industrial venues of the XIV International Sculpture Biennial of Carrara, Antony Gormley premiers 2X2, a double-figure sculpture, moulded onto the artist's body, and broken down into polyhedral forms which resemble the crystalline geometry of marble itself.

As you enter the factory, two imposing human figures - a product of mechanical labour - stand out from the rubbish; they are anonymous, non-monumental - in this way there are not any recognizable political or religious features, traces, elements - and they reflect the radical process of de-monumentalisation, which has freed sculpture from any celebratory function and upon which Fabio Cavallucci has opened the debate with the artists involved in the biennial. 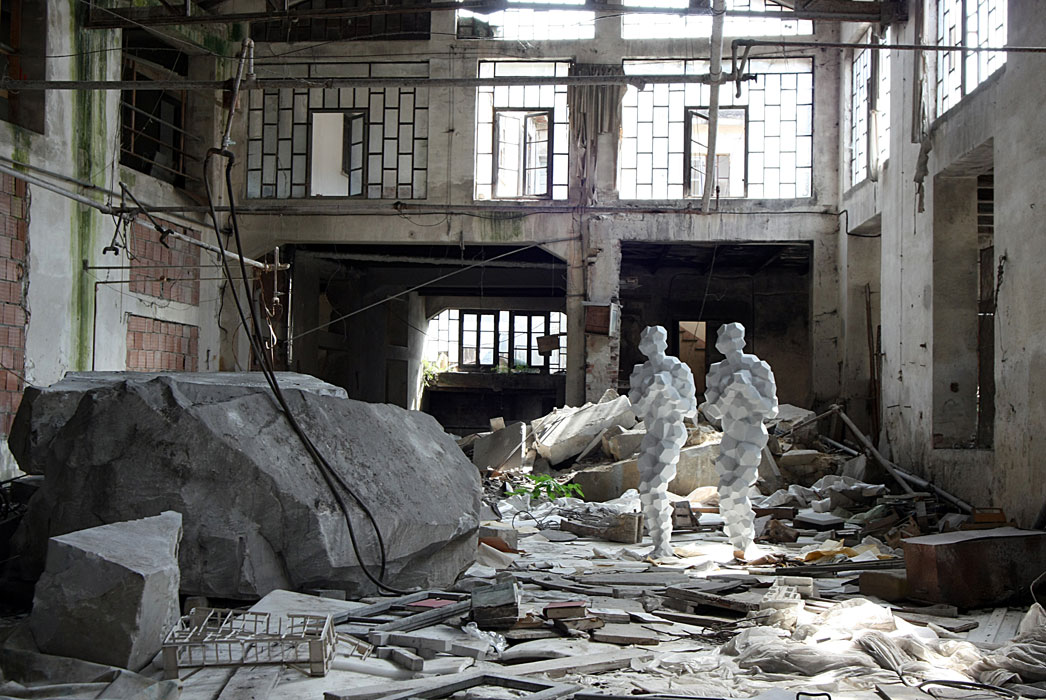 The function that art has today - Gormley says - is of a rather different order, today rather then reinforcing the known and giving us a sense of history that is given often by political hierarchies or by the victors, the function of art is to encorage a degree of disorientation, of displacement, of uncertainty in order to reinforce the subjects' self determination. This is really important.

In Carrara, Gormley was aware of the risks in using this workshop on account of its beauty - it's up to you to decide whether in a way the building of itself is more interesting than using it as a frame and I don't think of it as a frame but as really part of the work, I feel to have worked with the material of the context as part of the work - but he felt the need to use the uncertainty of the surfaces, the danger of the structures to activate the space and different perceptions of volumes, walks, passages.

The idea of transfering and transferences is very important to me, there are many forms of tranference, I would say empaty is the first, there is a place where a body once was, there is a place where I too could be; this is the idea of projection of subjectivity onto something else but I think there are other senses of tranferences: there is an implied instability whitin the poses of these two works, which I hope is a reference to the fact that as you come into this space you are uncertain about the state of anything, where you can go, what your relationship is to this ruined building; hopefully to transfer the visual command system - that is always trying to interpret and read enviroment to something else, which is in a way about first hand esperience - is a thing that is so precious: we are so good at reading that we forget to enjoy just the sense of moving over soft ground for istance...the strange in sculpture is in its inertia, in its uselessness, it is not active but it is the trigger that allows us to be more aware of our own liveness.

As sculpture, in its inertia, can help us find a new balance and an understanding of the space we use to randomly and absently surf - Gormley says - silence and stillness, elements for which sculpture has been blamed for not being able to fittingly portray the multi-layered nature of the temporal dimension of contemporarity, are a kind of relief, if we compare sculpture with the more articulate non-linear narratives, multi-projections and, in general, to that art production that amplifies and reproduces the chaos of everyday life.

The jingle of Dossier Carrara is a field recording of Nemanja Cvijanovic's installation at the XIV International Sculpture Biennial. Dossier Carrara is produced with the support of Maddalena Fossombroni, Pietro Torrigiani and Castello in Movimento at Castello Malaspina di Fosdinovo.